Two very different hustings in Maidstone. Last night I was with Helen Grant (Con), Greg Levitt (standing in for the Labour candidate who felt that being at Maidstone Studios where the leaders' debate was happening was more important) and James Willis (LD), at Beneden School. A crowd of maybe 200 sixthformers, around half of who will be able to vote for the first time this week. 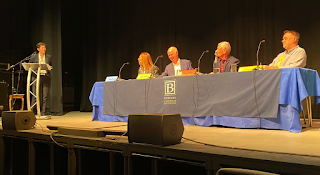 Last Tuesday saw a very different hustings. At the Quaker Meeting House in Maidstone were the climate hustings. This time I was with James Willis and another person standing in for the Labour candidate who had a sore throat. Helen Grant was at a family event (I saw the photos, it looked lovely, she was definitely there) but there was no one to deputise for her and I understand that the organiser offered to change the date of the event to accommodate her but no alternative was offered by her team. So two headline themes. Firstly, the no show on both by Labour and secondly the larger avoidance by Tories of climate questions and debates.

I did pin Helen down on climate change at the end of the Beneden debate though. When asked to give advice on how to vote and after Helen had talked about the 'record' of Boris Johnson, I suggested that voters should look at how Helen had voted on over the past 9 years and read out from theyworkforyour.com her woeful voting record on climate change which was in stark contrast to her rhetoric on the stage. Of course the Labour and Lib Dem record on climate change is not great either with continued support for road building, airport expansion and a new coal mine in Cumbria.
Posted by Stuart Jeffery at 09:40