Maidstone Greens have selected Stuart Jeffery as their Prospective Parliamentary Candidate for Maidstone and the Weald in the likely General Election later this year.

Stuart, who is a well-known green activist in Maidstone and involved in Extinction Rebellion, will also be campaigning on social justice and for a final say on Brexit, a second referendum. 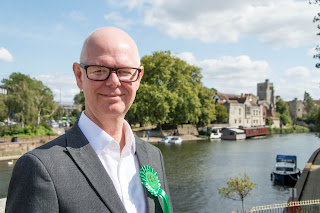 Stuart Jeffery: “I am delighted to have been selected to run for Parliament in Maidstone and the Weald. I have been thoroughly appalled by the actions of the Conservatives and Lib Dems over the past 9 years and their complete lack of interest in the environmental crisis that is unfolding around us.

“We have deadly air quality in Maidstone, ridiculous housing proposals on green spaces around the borough, a completely lax attitude towards the climate emergency and continued increase in inequalities that both Conservatives and Lib Dems have presided over, it is time for a fresh approach to tackle the most pressing issues of our time.

“I will also be campaigning for a second referendum. No one voted for a no deal Brexit or a return to the troubles in Northern Ireland. We are all far better informed than we were 3 years ago so it is time for a final say on what happens.”
Posted by Stuart Jeffery at 03:30