I really wonder if I should offer to buy the guy a calculator. He seems to think that 17.4 is more than half of 66. I have tried to convince him otherwise but then he may have also believed that the UK gives the EU £350m a week too. There's no helping some people. Should I stop feeding them though? 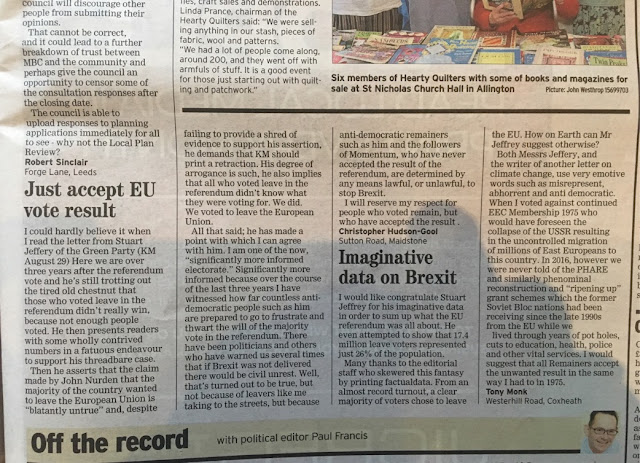 For the record, this is my original letter:

I am saddened that the KM chose to misrepresent the result of the EU referendum in last week’s opinion piece by John Nurden. Mr Nurden claimed that “the majority of the country wanted to get out of the European Union”. This is blatantly untrue and the KM should print a retraction.

A small majority of voters indicated a preference to leave the EU in the referendum. There were 17.4 million leave voters out of the 66.3 million people in the country, or just 26% of the country expressing a desire to leave. Millions of people chose not vote and millions more were denied a say in the country’s future.

Add to that the proven electoral fraud by the leave campaign and what is now a significantly more informed electorate and there is a real case for a second referendum on the terms of the withdrawal.