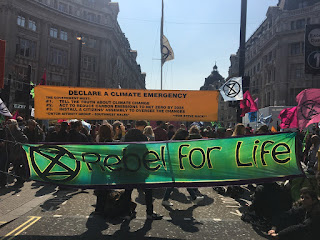 So the Commons has declared a climate emergency! Only 50 years too late but better late than never... Interestingly that vote happened on the same day that a court ruled against the campaign to stop the third runway at Heathrow.

We must have radical change and it must start now.

On Tuesday I was speaking on KMTV about the recommendation to end production of petrol and diesel cars by 2025. Some suggest that this is not possible. I suggest it is too late.

The idea that we can replace all those vehicles is crazy. The amount of electricity needed to power them would require an additional 50 power stations in the UK alone, and then there's the cobalt for the batteries...

No, while some will need electric vehicles, in general we need a swift and radical change to public transport which requires a massive investment and change of the way we live our lives. We need a swift change to local production and local food. 10,000 lorries a day passing through Kent is simply unsustainable.


Declaring a climate emergency is just rhetoric but it is a first step. Let's see rapid climate action. There are just 11 years left to ensure that we have a future.

Of course, as today is local election day, that action could start with a Green Party vote at the polling station!
Posted by Stuart Jeffery at 07:11