Five months is a long time in politics

It's almost five months since my last blog post - sorry! I probably better tell you some of what I've been up to...

The People's Vote march last weekend, I joined over a million people in London demanding a say on the final deal. It is quite clear that Parliament cannot express a majority opinion in favour of any course of action when it comes to Brexit so let the people have a voice now that we know what it means.

That choices should be 1. Remain; 2. A deal or 3. No Deal. It should be done by single transferable vote so as not to disadvantage any choice. 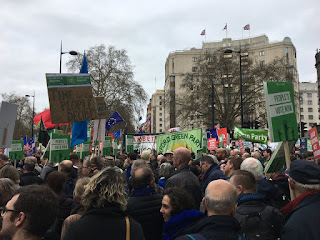 Last month I was in front of Maidstone's full council meeting pushing them to agree to declaring a climate emergency as other councils up and down the country have done. Surprisingly, after insulting me, the Lib Dems then refused to even discuss whether an emergency should be declared. I would have thought that the Lib Dems should be better on environmental issues than this.

Then there is air pollution... Maidstone has the fourth worst air pollution in the country outside of London. This is of no surprise to us or to anyone else who had tried to walk up Lower Stone Street at rush hour but it is useful to have it confirmed. I created controversy by suggesting that we need a congestion charge in the town - this hit the media and we made quite a splash with the idea.