100 years ago ended a war that didn't end wars 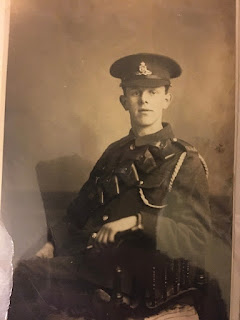 My great grandfather, Albert Enever (right) fought in WW1. He survived, his brother Ernie didn't. When I say survived, he certainly did physically but I don't know what it did to his mental health as he died in the early 1970's before I got to know him.

Harry Patch, the last surviving Tommy, was quoted as saying: "It wasn’t worth it. No war is worth it. No war is worth the loss of a couple of lives let alone thousands. T’isn’t worth it … the First World War, if you boil it down, what was it? Nothing but a family row. That’s what caused it. The Second World War – Hitler wanted to govern Europe, nothing to it. I would have taken the Kaiser, his son, Hitler and the people on his side … and bloody shot them. Out the way and saved millions of lives. T’isn’t worth it."

and "I felt then, as I feel now, that the politicians who took us to war should have been given the guns and told to settle their differences themselves, instead of organizing nothing better than legalized mass murder."

It is most interesting that this second quote down't appear on the BBC's website where I found the first one (I was looking for the more famous second quote). Once again the BBC fails to report the real story and opts for something that is politically more appealing to them.

War is wrong. Always. Yet the UK continues to make and sell weapons to rogue states, to have a military far bigger than is needed for 'defence' - yes I am happy to have a truly defensive military.

Peter Ustinov: "Terrorism is the war of the poor, and war is the terrorism of the rich."

Red poppies: I remain saddened by the Royal British Legion for their refusal to put the final and most poignant verse in their campaign advert in 2014. Just for completeness this is it:

As I have done for many years now I have been wearing my white poppy to remember those who fought and died in the wars but also to state clearly that there should be peace for the future.
Posted by Stuart Jeffery at 11:00