Had a lovely afternoon with Baroness Jones of Mousecombe (our Green Peer, Jenny). Tea on the 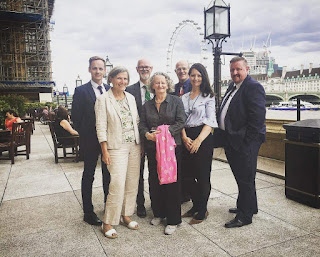 terrace, watched questions in the chamber, tour of the building etc. Huge thanks to Jenny for doing this - certainly learnt lots about how the Lords works.

There's no speaker for example. Generally the Peers debate collegiately, allowing the debate to alternate across the chamber. Apparently it occasionally goes wrong!

Five of my fellow Kent Greens were with me as you can see.

Even though the behaviour is better than the Commons, the Lords needs urgent reform. We pretend that we are a democratic country yet 800+ unelected peers have seats in the upper chamber. The upper chamber needs to be fully elected by proportional representation and not maintaining its 18th century approach.

Of course other tiers are nearly as bad. First past the post might be a little better, i.e. 19th century, but it still means that most people are not represented by someone they voted for. Hardly a democracy.

Roll on 21st century democracy.
Posted by Stuart Jeffery at 19:43