Britain First may inadvertently raise funds for the Maidstone Mosque 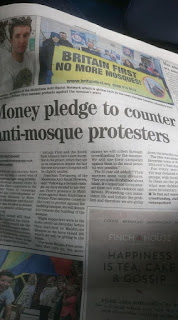 I love this idea. It came from a town in Germany that donates money to anti-fascist causes whenever the fascist march there - and they taunt the fascists as they march, letting them know how much money they have raised so far.

So here in Maidstone, which has seen numerous protests by Britain First this year who don't want the Maidstone Mosque to be rebuilt, the Maidstone Anti-Fascist Network which I proud to be a member of, have decided that when Britain First come down to protest we will raise £10 for each one of them who turns up and donate it to the Mosque to help get it built more quickly.

http://www.kentonline.co.uk/maidstone/news/money-pledge-to-counter-anti-mosque-131290/
Posted by Stuart Jeffery at 17:59