One of the more worrying trend, if there can be anything more worrying than climate change, the rightward swings in politics, peak oil, etc., etc., is the increasing noise on soil degradation. Even the Archers are talking about no-till agriculture to improve the soil, plus today is World Soil Day.

A few weeks ago I was at a talk on Global Health at UCL where Christiana Figueres. Primarily she talked on climate change but one of the challenges she mentioned was soil degradation. Obviously I've been aware of the issue but she pointed out the speed of the degradation which I hadn't quite realised.

According to Wikipedia there is currently 1407 million hectares (5.4 million square miles) of arable land in the world, although figures and definitions do vary a little! This is about 10% of all land.

We have lost a third of available arable land to degradation since the 1960's and Scientific America reported a UN official suggesting that there may only be 60 harvests left. Monbiot cited a study which showed that 12m ha are lost each year (almost the size of England) and that we need an additional 6m ha each year to cope with the increasing population.

Without wanting to go all Malthusian, we have many people who are overfed and many who are underfed currently and there is a lot that might be done to make sure everyone gets their fair share. Obviously this also ignores potential improvements such as farming methods, safe GM crops doubling yield values, the end of deforestation, and the halting of climate change, however I can't see any of these happening given the current global political and corporate scenarios... 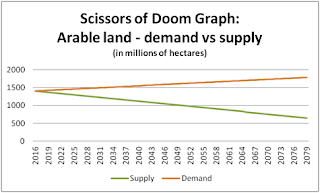 In 60 years at a loss of 12m ha per year, around half of all arable land will have been lost. Adding in the impact of population growth and assuming that the world carries on with BAU on climate change etc., it will only take 47 years for area of arable land per person to be half its current level.

If we think that Europe is struggling to cope (at least politically) with refugees from North Africa and the Middle East, imagine how much worse that would be if the was only half the amount of food available per person.

So those things that I cannot see happening given the current global political and corporate scenarios are, with the exception of GM, necessary. Improvements in farming, fair distribution, halting climate change and so on are essential. Import too is action at a local level. We can't build on greenfield sites; we need them for growing food but we need more homes so build upwards and build high density homes rather than the sprawling executive houses that we see springing up on former wheat fields.