Good coverage on the gyratory

We've had some great coverage on our first protest against the £5.7m of road 'improvements' in the town centre. £5.7m will reduce travel time through the town by 73 seconds, allow much more traffic to flow though the town, save countless lives and ensure the entire UK economy doesn't crash post Brexit. Ok, I made up the last two but the first two are important.

Allowing more traffic to flow and allowing it to flow faster are a recipe for disaster. Obviously the council is facing a huge problem after allowing thousands of homes to be built on the southern fringes of the town. Homes that are so far out and without a bus service that residents will need a car to get anywhere. But widening roads simply compounds the problem and, of course, the increased traffic will pollute more and eventually grind to a halt.

So we've been out waving placards. The KM featured us and Steve and I did Radio Kent interviews last week. 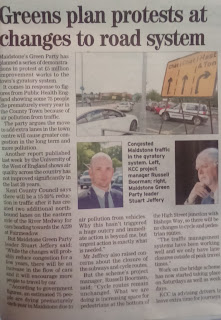