Getting in to Maidstone on foot 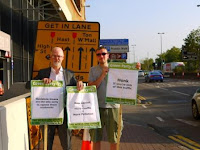 Last week a few of us made a bit of noise about the road works on the gyratory. The gyratory is the main roundabout that forms the centre of Maidstone's road network. It crosses two bridges and connects 4 main roads. It can be a nightmare to drive round especially during rush hour. So it is being revamped to know a few seconds off the journey time and to let more cars through, which is why we are unhappy.

The other problem with the gyratory is that anyone living in West Maidstone has to cross the river to get to the town centre. Bad enough by car and very scary by bike but KCC and MBC have made it much hard by foot now.

There were four subways under the A229. There are now just two and the one that was used most has been filled up and bricked up. People coming down from Tonbridge Road now have to cross at the lights. 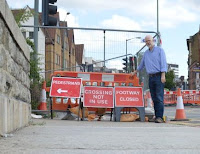 But is is worse for those of us who come from the London Road direction. My route across the traffic islands has been closed off and the nearest alternative subway has been bricked up. This morning I watched person after person crossing the four busy lanes of traffic at a point where there is no crossing.

So no only are the 'improvements' costing £5m, they will increase the volume of traffic though the town and they make it much harder to walk into town.

Thank you KCC and MBC.