On 27th April, Maidstone's Policy and Resources Committee, chaired by the Lib Dem Leader of the Council Fran Wilson agreed to spend £3.1m on putting more block paving down in the shopping areas of the town centre to drive up economic growth (i.e. spending in the shops). But just six years ago the Lib Dems were attacking the Tories for doing the same on the High St, claiming among other things that there would be "Zero benefit for tackling traffic congestion and air pollution".

The Lib Dems have been running the council with the support of Labour and Independents (not that they admit this given what they put on their leaflets).

Just in case they decide to try to alter history, this is what their attack in 2010 said: 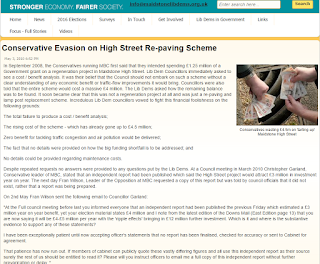 Meanwhile homelessness has seen a six-fold rise since 2010 and the council is focusing the type of homes on expensive executive houses, not the type that will help those in need. Perhaps spending £3.1m turning the Power Hub into affordable homes would not go amiss? How about tackling air pollution as the Lib Dems wanted to do 6 years ago rather than increasing the traffic through the town centre.

I've listed the members of the committee below so that we can all see who is responsible for this pathetic decision. According to the webcast the decision was unanimous (see 67mins in):