Labour rightly claim that they founded the NHS but their planned boycott of the second reading of the NHS Reinstatement Bill means that their support for the NHS is in tatters. 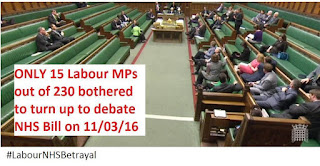 The Bill was presented to Parliament by Green MP Caroline Lucas after Tory MPs tried to filibuster her time away. That was disgusting enough but then we learnt that Labour MPs were instructed to boycott the debate and only 15 Labour MPs out of 230 turned up. Corbyn was not one of the 15.

Below is the letter that Labour MPs were sent to pass on to their constituents as their excuse for boycotting the Bill. Remember this was a template that they were to use - it was not a personal letter from an MP to his / her constituents.

It is clear that the orchestrated boycott of the reading of a Bill that would see an end to NHS privatisation, an end to the market and a return to the duty of the Secretary of State to provide services, demonstrates that Labour have no interest in keeping the NHS public and that it is certainly not safe in their hands.

The debate is due to be resumed on 22nd April. It will be interesting to see what Labour do on that day...

“Thank you for your recent email asking me to be in the House of Commons for the second reading of the NHS Bill 2015 on Friday 11 March.
I very much regret that due to existing constituency commitments, I will be unable to be present but I thought it would be helpful if I set out my views on the Bill.
As you may know, this Bill was introduced as a Private Member’s Bill last summer and as such, it is subject to the constraints associated with the parliamentary timetable. Even if the Bill were to receive its second reading this week (and there is no guarantee that it will even be debated), there is little prospect of the Bill becoming law in this session due to a lack of parliamentary time.
The Opposition is supportive of the overall objectives of the Bill. In particular, we support the principles behind duties outlined in Clause 1 of the proposed Bill – namely restoring accountability to the Secretary of State for the delivery of health services and the requirement that a comprehensive health service continues to be provided free of charge.
Labour also believes that the encroaching privatisation of the NHS must be halted and that decisions about NHS services should never be called into question by any international treaties or agreements, such as the Transatlantic Trade and Investment Partnership (TTIP).
However there are concerns that some of the other parts of this Bill would require another wholesale reorganisation of the health service.
The recent top-down reorganisation of the NHS, brought about by the Coalition’s Health and Social Care Act 2012, threw the system into turmoil, cost over £3bn and eroded staff morale.
So whilst I support the broad objectives which lie behind this Bill, I am concerned about the scale of structural change and costs associated with any further major reorganisation of the NHS.
If the Bill were to proceed, Labour would seek to amend it so that it avoids the problems of a further reorganisation but implements the key principles of the Bill.
In line with our manifesto commitment at the last election, Labour is committed to repealing the competition elements of the Health and Social Care Act 2012, and ensuring that patient care is always put before profits, and collaboration before competition.
Thank you for taking the time to contact me about this matter.”
Posted by Stuart Jeffery at 16:51