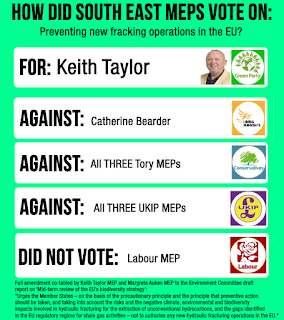 Last week Keith Taylor's amendment to the review of the EU's Biodiveristy Strategy to ban any new fracking in the EU was agreed despite opposition from:


While I understand the Tory and UKIP love of the countryside extends no further than blood sports so I expect nothing better from them, I hope people take note on how the only Lib Dem MEP voted.

I highly expect that the Lib Dems will continue to claim green credentials but this adds yet another fact to their lie.

"Urges the Member States – on the basis of the precautionary principle and the principle that preventive action should be taken, and taking into account the risks and the negative climate, environmental and biodiversity impacts involved in hydraulic fracturing for the extraction of unconventional hydrocarbons, and the gaps identified in the EU regulatory regime for shale gas activities – not to authorise any new hydraulic fracturing operations in the EU."
Posted by Stuart Jeffery at 13:53