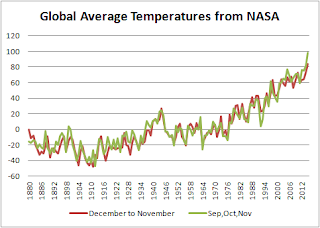 In yesterday's post I spoke of NASA's data which showed that global average temperatures are now 1.2 degree C above pre-industrial levels. In order to ram home just how this looks I though a graph would be in order.

The red line is the global yearly average measured from December to November and the green line is the average through each autumn.

As you can see, in Autumn 2015 the world average temperature was 1.4 degrees hotter than in Autumn 1912.

Fortunately the world has agreed to try stop temperatures exceeding 1.5 degrees by only continuing ton increase atmospheric CO2 until 2050 and Cameron has taken this to heart with the expansion of fracking and significant reductions to renewables. (Phew! - In case the irony is not clear enough...)
Posted by Stuart Jeffery at 08:20