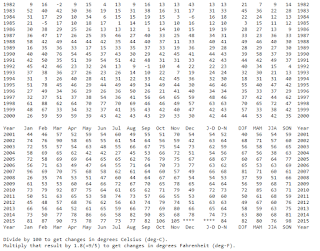 Each month NASA publish the variation to global average temperatures against a baseline of the 1951 to 1980 average. This is a mid term industrial average baseline so it is hotter than the baselines that appear in many texts, i.e. the pre-industrial baseline which is about 0.2 degrees celsius lower.

I've been clicking on the NASA site every month for the past few years for my regular dose of horror, watching the global temperatures rise. Last month I was astonished to see a huge rise in Oct 2015 and this morning I see that November is the same. For the first time they have been more than 1 degree hotter than the 1950-1980 average and therefore 1.2 degrees hotter than the 19th century.

So what chance is there of containing climate change at 1.5 degrees? With a COP21 that agreed to continue to increase atmospheric CO2 until 2050, there is none. You would hope that news of such a leap might wake the media and governments up. Sadly they are part of the problem and their influence stops the majority from understanding what is happening.

If there was a time for climate action it has to be now and it has to be quick.
Posted by Stuart Jeffery at 09:08