Lest we forget: war is horrific and usually pointless 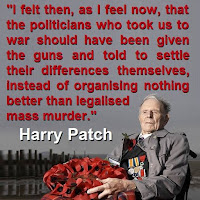 Lest we forget, one of the most poignant phrases on Armistice Day. Supposedly we should not forget the people who died during the wars but clearly many, including the Government, have forgotten the horrors and usual pointlessness of war.

The war in Syria continues while Labour MPs are going to defy their leadership and vote in favour of military intervention by the UK, they have forgotten. So in what regard should the UK have any right to intervene I need to ask? The UK Government seems to think that Britain still rules the waves and should act as the world police force, it has forgotten too. We should be calling for the UN to talk to the Arab League to support a political solution rather than more killing.

Meanwhile Russia seems to have jumped in in. A Middle East state in crisis and needing combined with Russia's desire to have a base and ally in the region meant a simple decision for Russia, especially with NATO troops in many countries there. Russia seems to have forgotten.

There are some people who really understand the horrors and have not forgotten, such as those standing up for the refugees in Dover last month. War destroys lives, the lives of those fighting, their families and the civilians who live in the war zones. The 2003 Iraq war killed at least 200,000 people, mostly civilians.

But we can expect Farage to forget. His comment that 100k more people should have died in 1918 and that the Armistice should not have happened is frankly an obscene comment to make. It would not have stopped the rise of the Nazis or WW2.

So let us remember: listen to The Green Fields of France by Eric Bogle and especially the final verse.