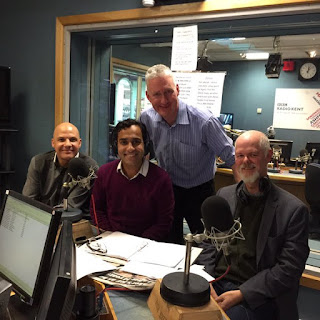 Yesterday I was one of Lembit Opik's guests on his Radio Kent current affairs show. His other two guests were Michael Mason-Evans who works as support worker for homeless people in London and Rehman Chisti, Tory MP for Gillingham and Rainham.

Rehman suffered a bit of an onslaught, whether we were talking tax credits, the tampon tax, the failure of democracy which has allowed 24% of the electorate to give the Tories a majority in government (while the Tories want at least 40% of union members to vote to go on strike before they are allowed to), or feed in tariffs.

We also discussed the Chilcot Inquiry where I stated that Blair should face an International War Crimes Tribunal.

I even managed to agree with part of a quote from Nigel Farage where he said that there were more important things than money (although that was as far as the agreement got).

Lembit chaired well and I hope the debate was informative.

You can listen to it on iPlayer for a short time too.
Posted by Stuart Jeffery at 07:16