Obama drills while the Arctic melts and India dies 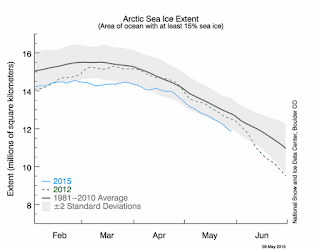 The Arctic is on course for one its lowest levels of sea ice ever this year according to the National Snow and Ice Data Center. India is seeing its death toll passing 1100 from their 47C heatwave and California's record breaking drought is in its fourth year which when added to Obama's recent approval to drill for oil in the Arctic and the UK governments dash for gas through fracking our land, shows has damaged our pseudo-democracy is.

It is clear that the influence of capitalism, corporate greed and the media moguls over government and society is appallingly destructive. The path to climate chaos is not only being followed but it is being positively hammered along.

With the grip of vested interests over governments and the masses, I hold out little hope for this year's climate summit but we must not give up, there is too much at stake. I will be attending the marches this year and I will be writing to MPs, but most of all once again I will be fighting to get elected.