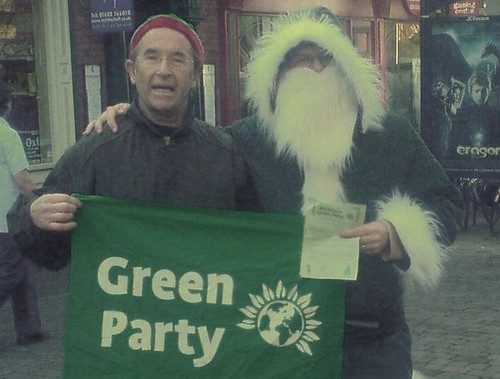 My Christmas message in the Kent on Sunday today:

2014 has been a year of highs and lows. Globally, it is highly likely to be the hottest year on record ever, while food bank use  and homelessness  in the UK have hit record levels too. There have been positive highs too. As a Green, the surge in our support has been very welcome with our membership doubling this year and polls putting us in 4th place regularly over the past few months.

The lows of the year have to include the minimal tax paid by the super rich, which is finally getting acknowledgement, the flooding across the county last winter and the austerity measures that continue to cut public services and support for the vulnerable in society.

In November the UN’s Intergovernmental Panel on Climate Change (IPCC) released its most stark report yet, telling the world that climate change is set to inflict “severe, widespread, and irreversible impacts”, a warning that is falling on deaf ears despite global CO2 levels hitting an all-time high and world temperatures being about to break yet another record.

The reaction of governments around the world? December’s climate talks in Lima have ended with a vague commitment that all countries should reduce carbon emissions.

The impacts of the continually rising temperatures are being felt across the planet with wildfires, droughts and floods. While climate change will hurt poorer and low-lying countries the hardest, we are not going to escape the effects. Here in Kent, we saw some of the worst flooding in living memory last winter and these floods have been clearly linked to climate change . Climate change is set to become the defining issue of our age.
And it is not just global issues that have marked 2014. This year almost one million people have used food banks across the UK, in a country deemed the 6th richest in the world. The Trussell Trust, which runs the largest food bank network, suggests that this is just the tip of the poverty iceberg.

There are now over 60,000 households living in temporary accommodation, 20% higher than in 2010, a figure that must surely shame us. Add to this the continually increasing house prices, up 12% this year alone and double their 2002 levels , plus rent increases outstripping income, and you have a recipe for disaster. Access to a stable home seems to be rapidly disappearing for many, as people are priced out of the market.

There are so many more examples where Government has failed that 2014 needs to be branded as the year that the country finally agreed that politics is broken.  As we head into 2015, we need to make this the year we start to fix it.

There are calls from many quarters to reform our so-called democracy. Whether it was as a result of the Scottish referendum, which will hopefully bring more devolution to the regions as well as Scotland, or calls for a constitutional convention to consider what needs to be done to make government more representative, the calls for reform are very welcome.

But there are dangers ahead which will scupper reform. The Transatlantic Trade and Investment Partnership (TTIP) won’t just be bad for the NHS, it will be bad for the country. It will undermine our laws and let US companies sue our government on US laws. There is a long fight ahead with most political parties backing TTIP despite its affront to democracy and government.

I want to make two predictions for the new year. Firstly an easy one: the coming General Election will be one of the most interesting ever. The three-party political system is starting to crumble. We’ve all seen UKIP’s win in Rochester and doubtless they will make other gains in May, but the Greens are going to make a huge impact too, including in Kent.

Secondly, the emerging environmental problem of 2015 will be air pollution. While fracking, flooding, climate change and the disappearing natural world will continue to be at the forefront of campaigns, the impact on people’s health of air pollution will begin to register. Low estimates put the annual death toll from air pollution at 29,000 each year in this country and just last week the chair of the Government’s Environmental Audit Committee said that there are nearly as many deaths as from smoking.

Finally, as we are heading into the Christmas break, a time when we should be with friends and family if we can, I wanted to share with you an important answer to an import question: how to be green.  A good friend gave me the answer many years ago: just consume less, share more and enjoy life.

Have a good Christmas.

I have just installed iStripper, and now I enjoy having the sexiest virtual strippers on my desktop.