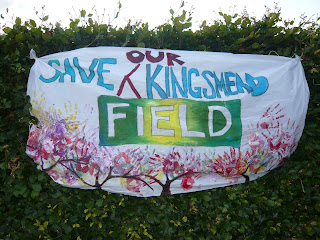 Kingsmead Field had been referred back to the Council's Executive meeting for further discussion last night. In particular, a significant part of the land which campaigners wanted to be designated as a village green. The decision has been been referred back on three grounds: 1. Failure to properly consider Government / Defra Guidance in relation to Village Green usage; 2. Failure to consider the impact on biodiversity, green infrastructure and the woodland corridor through the development of 20% of the field; and 3. Failure to consider the aims of the draft Local Plan with respect to biodiversity.

I sat alongside the campaigners as they spoke brilliantly and passionately about the land and its value, before the councillors stated that they want the money from the sale of the land for development and that the money is more important.

Even the councillor for the ward immediately neighbouring Kingsmead Field, Cllr Westgate didn't support the campaigners. Probably worst of all was Cllr Doyle who claimed that the space was underused and that there would be less of an obesity problem in Northgate if more people used the field for exercise.

Personally I was quite shocked at Cllr Doyle's remarks. They show a clear lack of understanding of the drivers of obesity which are social and economic in the main and are therefore mostly influenced by local and national government.

So, an expected result from a council focused on money rather than people and nature.

I have offered my help to the campaigners as they continue the fight.