UKIP explain their approach to PR in Kent

Janice Atkinson, number two UKIP candidate for the South East met with Kent Green Party colleagues in Ashford and didn't seem to want to defend their racist policies with logical argument. I wonder if she treats everyone who disagrees with her the same way. Certainly this is not how to behave as a politician.

According to the Independent: "Last week Ms Atkinson said that the accusations of fascism and Nazism aimed at Ukip by activists were “disgraceful”. She said the party had called for any protesters who “call our supporters fascists, hurl other abuse or any physical assault” to be arrested by police." 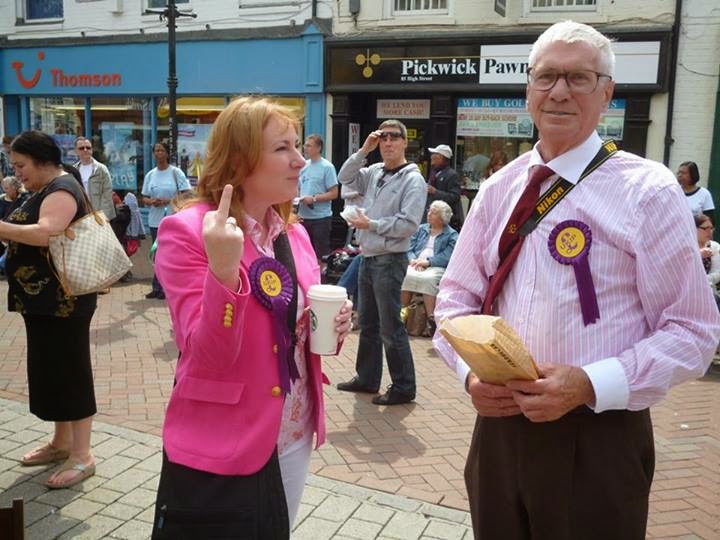 This is from Maria Pizzey: "This is UKIP's MEP candidate for the South East. She described herself as Nigel's number 2. She told us to f**k off because we stood peacefully holding placards accusing UKIP of racist policies. She offered no debate or arguments to defend her party and despite the chap in the picture asking us to pose for photos, this was her response when asked to return the favour. She made personal comments about my body size and when I told her I would quote her widely she said "I don't care where you f***ing post this, just f**k off!" Hilariously, I have just discovered she is UKIP's press advisor. This is the most rude and aggressive individual I have had the misfortune to come across and she wants to represent this country in Europe. By the way her name is Janice Atkinson."
Posted by Stuart Jeffery at 15:18

Surely Maria is not too bright, peacefully holding banners accusing UKIP of racism.

I'd take that as not only extremely provocative but also a revolting defamation.

UKIP are only reacting to the concerns of roughly seventy percent of the community.

I think you need to google the meaning of fascism. Attacking freedom of speech is one of the key traits. The threats of violence towards my friends is another.

Funnily enough one of the consequences of high immigration is a demand for extra housing, thus building on green belt land. I thought you'd be against that? How do you square that up? How would you suggest that we solve the housing crisis?
Incidentally how would you like to have a screeching woman haranguing you all afternoon whilst campaigning. I agree with the writer above, she was there just to provoke a reaction.

Screeching? Clearly you were not there.
UKIP seem very unhappy with peaceful protest - I assume you would like to abolish that right if you get into power.

Who said I was UKIP supporter? We both know what happened that afternoon. Finally how about answering my question or can I put you down as a typical politician?

I assume you are a UKIP supporter as you obviously don't accept that the protest was peaceful.

In terms of immigration, I will refer you to our comprehensive policy on the subject which I fully support - here.

The majority of forecast pressure on housing in Maidstone where I live is due to internal migration, i.e. people from other part of the UK. The government should be investing in other areas of the country to reduce the economic disparity between the regions which encourages migration rather than encouraging growth in the south east to push up GDP overall at the expense of the people.

Finally, the focus on international migration and the increasing racism is driven by the media and big business as diversion of blame. Remember, it wasn't the migrant workers who crashed the economy, it was the bankers supported by the Tories and Labour.

Stuart, I really wish you wouldn't keep referring to me as a UKIP supporter. The protest was not peaceful, you had people spoiling for a confrontation. The behaviour of that young woman and her friends was fascist for want of a better word. I don't particulary like Janice Atkinson, but she is an elected representative and they all should be treated with some respect, even if you disagree with their opinions.

Thank you for the link. Looking through your migration policy it still doesn't address how to resolve the impact of mass immigration. We need more roads, more schools, more housing, more hospitals and more airport capacity. All things that are against Green principals surely? Where are we going to put it all?

As for Maidstone, you know very well that the population movement is from London. The same applies to the other Home counties experiencing the same pressures from immigration in the capital.

Finally, I agree with you about the bankers. They are responsible for a lot of our problems and should be held to account. Unfortunately so long as we have the same old political parties, that will never happen.

Big business is also responsible for a lot of our problems, including it's love of cheap labour!