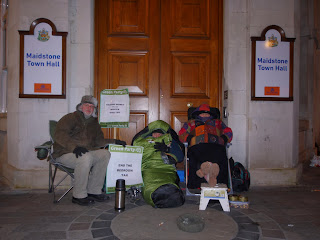 sponsored sleep out in Maidstone town centre quite hard but no where near as hard as it must have been for rough sleepers for whom that night was the first of many very cold nights to come.

Four of us spent the night in front of the Town Hall raising over £700 for the Winter Shelter. The organisers of the shelter, set up by the local churches, kindly visited us in the early evening.

The very cold night was punctuated by a stream of great people, most of whom had been at one of the many clubs and bars surrounding the sleep out. People would walk past, turn around as the penny dropped as to what we were doing and they would chat and donate what change they had without us asking for anything. Even a passing policeman gave the change he had and Cllr Garland walked by and offered more money from the Council (we will be holding him to that!)

The first donors of the night were a couple dressed as Santas - appropriately fitting concept to giving at this time of year!

Loud music filled the air until just after 2am when the majority of clubbers started to make their way home. The last of the clubbers seemed to have left the town centre at around 3:30am when the kebab shop seemed to close. It finally got quiet then.

The river, just a few hundred yards away, flooded briefly with the storm surge at around 3am. The water must have come over the top of Allington lock.

The area was very quiet from 3:30 to 4:30 but at around 4:30am people were starting to walk to work and the town took on a very different feel.

Street cleaners started at around 5am, with a man pressure washing and a few of those scarab vehicles sweeping. Why the square needs pressure washing on a Friday morning is beyond me - does this happen every night?

Toilets... Ok, the men have somewhere to have a pee. The open backed urinal is a good idea but what about women? There is simply nowhere for women to have a pee unless they go into a bar and certainly no option after midnight. This is not good enough.

The cold was bad. The chill of the night got through layers of thermals and space blanket. I can't begin to imaging how bad it would have been without them.

There were four of us with a CCTV camera and police driving by regularly, it was very safe but it would be a very different feeling being on your own in a place less visible. My heart goes out to those people who spend each night on the street.

We ended the sleep out at 7am as the town was getting busy. Full English in The Muggleton was very welcome but something that most homeless people are unlikely to get too often.