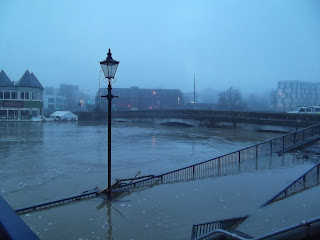 As the water has finally stopped dripping in to the living room and the sun has been out all day, I've spent a few hours tackling the holes that I found in the roof. Let's hope I found where the water was coming in before the return of the storms tomorrow.

While I just had a large puddle in the living room and now need to re-plaster the ceiling, others have had it far worse. People rescued from homes in Yalding, people lost all possessions on their ground floor as the flood waters rose and people were without power in Maidstone making Christmas dinner a little difficult to cook.

The River Medway looked slightly lower this morning, with one bridge open at 9am. Fairmeadow was still flooded but Fremlin Walk was getting ready to open for the sales - the can be no let up in the commercialism of Christmas, but if I watch another advert for a new sofa I will scream.

People are saying that it is the worst flooding since 2000, others since 1968. Whatever the truth, there is more to come. November this year was the hottest November ever globally and this year saw the CO2 levels exceed 400ppm for the first time. Climate chaos will simply make events like this more regular and tougher to cope with.

My heart goes out to those affected by the floods and storms and I hope that others may reflect on how consumerism is making storms worse.