A few people have mentioned the 41% figure to me in recent days - this is a figure that came from a DECC report in March 2013 and which has morphed its way into a popular attack on the renewable sector.

Comments such as these abound on the interweb:


The FT: State “energy and climate change” policies – including subsidies for wind farms and nuclear power stations – will add 41 per cent to the price of electricity in the UK by 2030 according to forecasts by the energy department.

The Spectator:  The green taxes that add £112 to your energy bill

The Mirror: “Green” taxes will then make up a third of a family’s electricity bill [by 2020]

But looking through the report from DECC, a completely different picture appears. Currently green policies account for 9% of the average energy bill and 2% is 'green taxation'. The 41% figure applies to green policies in 2030 for electricity only but when combined with gas the net figure is -3% (or +1% excluding building changes)

This is the table from the report: 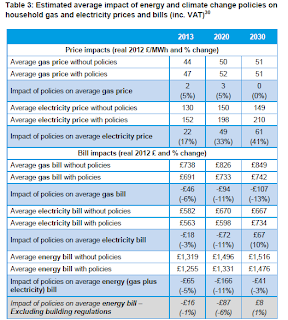 So the Mirror wins the award for the worst journalism, reporting the cost of green policies on electricity only in 2020 while ignoring the overall 11% reduction. Sensationalism beats fact.