Votes don't get counted in Kent until later this morning but in other places it looks like we are doing well. Rochford West in Essex has been won by Michael Hoy for the Greens and it seems there is a second new Green councillor there too. Looks like we held our seat in Gloucestershire.

We've worked hard in Maidstone getting 15,000 leaflets out across the town and along with the usual electioneering, I spent a couple of hours on the Big Green Battle Bike with a megaphone strapped to the handlebars which had a recorded message to 'Vote Green today'. Got plenty of thumbs up as I cycled round. 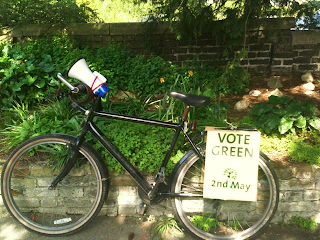 Email ThisBlogThis!Share to TwitterShare to FacebookShare to Pinterest
Labels: elections