With less than a week to go till polling day, the elections look even more interesting than usual and we have 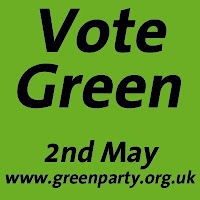 high hopes of gaining our first seats on the council helped by the collapse of the Lib Dems and Tories while Labour remain out of favour.

Yesterday I took part Radio Kent's leaders debate with John Warnett and the leaders from five other parties in Kent (as Kent Greens don't have a leader and I was introduced as chair).

I was quite disheartened to hear Labour Councillor Gorden Cowan explaining that he would keep selective education in Kent - we would scrap it as comprehensive schools have better outcome for kids overall and are not socially divisive.

Paul Carter bizarrely tried to explain away the lack of primary school places as being a result of an unexpected rise in the birth rate. I pointed out that there was a time lag between being born and starting school that allows for councils to start planning - 5 years should be plenty of time too.

UKIP and English Democrats banged the immigration drum a couple of times as you would expect from them. I would have loved to get into this debate but John Warnett moved on to topics that the county council has control over.

Trudy Dean of the Lib Dems seemed nice but didn't say much of note and her position on the issues seemed close to the Tories on many topics. Clearly the Lib Dems have sold their souls and the public know it. I suspect it will be a bad election for them.
Posted by Stuart Jeffery at 07:26