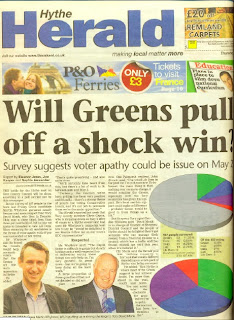 A poll by the Hythe Herald of almost 500 people has put Green candidate Martyn Whybrow ahead with
35% leading the Tories on 30% and UKIP on 27%. Interestingly non of the public were prepared to say they were voting Lib Dem.

Martyn is a great candidate and the Greens came second in Hythe East in 2011 so they have a real chance of winning.
Posted by Stuart Jeffery at 20:27