Tory councillor, Steve Paine has been blogging about Maidstone's high employment rate - the highest in the county - but this only tells a third of the statistical story and the other two thirds are not good.

Employment rate in Maidstone in the year to June 2012 was 85.9% (from nomis), the third highest in the South East. Interestingly Canturbury had the lowest rate in the South East, just below Hastings and our neighbours Tonbridge and Malling. Medway, our neighbours to the north had an unremarkable 'just below average' position while Tonbridge is more affluent than Maidstone and all three towns have large commuter populations (to London). Quite a random picture.

Weekly pay puts Maidstone slightly below average for the South East, above Medway and below Tunbridge Wells and Tonbridge. 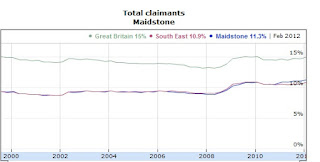 But then we look at total claimants and find that Maidstone has more claimants (11.3% to Feb 12) than the SE average (10.9%), a figure that is not falling either but has rise since the Coalition was elected. In fact Kent has 6 boroughs in the worst 10 for the SE.The figures for JSA claimants are similar with Maidstone being worst than average at 2.6% (Nov 12) compared to SE at 2.4%

Two seeming opposite statistics so what do they mean? Is the cost of living so high in Maidstone that people are forced into work if they want to live here? Are there high numbers of part time workers? Is it simply a quirk of stats?