How urgent could action on climate change be?

Being my usual week behind everyone else, I'm sure you all know just how serious the arctic ice level has become. The record to low ice levels was hit 8 days ago, 3 weeks before the normal low point in the yearly ice extent cycle. The level is at its lowest level in recorded history as the graph below shows (the graph is from Arctic Sea-ice Monitor). 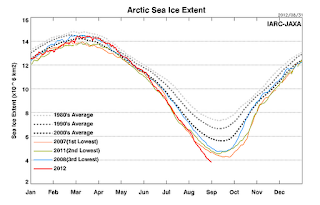 The impact of man's burning of fossil fuels is unfolding before us and we are rapidly running out of time to do anything about it (see the "100 Months" campaign that has been running for the last 49 months). Once the warming reaches tipping point, feedback loops will push the catastrophe harder and faster than humans ever could - white ice reflects heat, whereas dark seas absorb it; methane released that has been locked away by ice etc.

There is now talk of an ice free arctic by 2030 compared to forecasts 5 years ago that we wouldn't see this until 2100. I suspect it will be even quicker.

Equally shocking is the Greenland ice. As this melt it contributes to sea level rises and July saw the entire sheet thawing for the first time.

The rest of the world is not escaping these changes either. This is a short summary of US weather this year from CNN.

How urgent could action on climate change be?