Greens in the media

There's quite a lot of humour with the Greens in the press at the moment. As Maidstone residents know, the museum extension to the 16th century listed building looks like a shiny handbag and is completely out of keeping with the character of the building, so when the Kent Messenger ran a story about the council selling advertising space it just had to photoshop Brasso on the side: 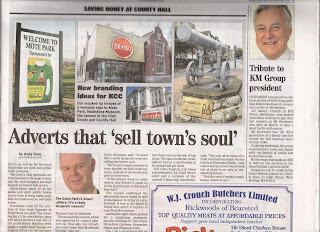 It was also good to get coverage on this for us too.

Staying with humour, Jenny Jones is quoted in the Guardian on her Mayoral campaign saying on the HS2 rail link: instead of building a multibillion-pound, high-speed rail link to Birmingham, the government should invest in high-performance alarm clocks for executives so they could catch their trains half an hour earlier. Great stuff!


Back to Maidstone where we have been helping Keith Taylor with his 20mph camapign. Keith visited Maidstone on Thursday to see Upper Fant Rd where we have been working with residents on the 20mph wheelie bin campaign. One hundred residents now have stickers on their wheelie bins asking drivers to slow down. Ever other week all those 20mph sighs appear in the road! All the local press have covered this including ITV Meridian.