I wanted to look more at last week's European fiscal union negotiations. The agreement that Cameron refused to sign up to is available here and it make surprisingly easy reading.

Last weekend the press was full of Cameron protecting the city against a Financial Transaction Tax, prompting this great quote from Ian Rankin: "The United Kingdom consists of 90,060 square miles. David Cameron has fought tooth and nail for 1 of them.".

Maybe I'm missing something but I can't where last week's agreement mentions the FTT. This is a summary of measures that were agreed (according to the BBC):
No mention of the FTT in the BBC's summary or in the Statement by the Heads of State on the Fiscal Compact. This begs the question as to the real reason for Cameron refusing to sign.

I had set out my position last weekend: fiscal union would be more damaging than monetary union; however this does not mean that the UK should not be at the table when it comes to trying to ensure that the European economy does crash again. We need Europe as a trading partner, as it has been for thousands of years; to simply walk away from them and think that we can stand alone without European friends shows a seriously damaging level of hubris.


But the deal on the table would have been highly damaging. Constraining countries in their ability to maintain essential public services as the Fiscal Compact will do, is the wrong approach to the cash flow problems. Capping budget deficits, especially in the short term, is particularly bad for countries.

The deficits in 2009 & 2010 of around £150bn equate to around 10% of GDP, so under the proposed EU rules the UK would have had to close down £100bn of spending overnight - equivalent to the closure of the NHS. Yet the deficit was not caused by overspending, it was a dramatic fall in tax revenue which was caused by the recession (corporation tax is paid on company profits which suffer in a recession and income tax relies on people having jobs). Not being able to maintain essential public services would hardly be acceptable position to agree to.

Argueing for the closure of tax havens, bringing in a financial transaction tax, making carbon quota trading work and generate income for governments, finding a way of not relying on economic growth to bail out governments, and shifting energy hungry economies from being rooted in fossil fuels to energy efficient ones powered by renewables has to be the way forward.

Of course, unlike Cameron, some of us are happy to be arguing for local control of monetary and fiscal policy at the European Parliament: 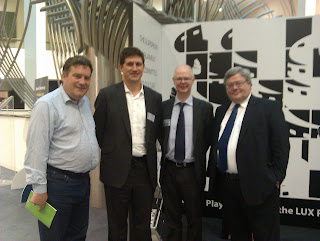