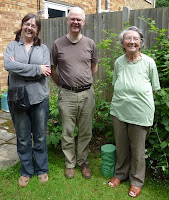 Kent Greens honoured Edith East yesterday for her fantastic and lengthy committment to the Green Party.

Edith joined the Ecology Party in the 1970's, has camapigned at Greenham Common and Faslane and this year stood in the local elections - not bad for someone who is 90.

She showed me a press cutting about her candidacy, it was alongside an 18 year old candidate who was the youngest in Medway. The striking thing was that they mentioned who was Prime Minister when each was born: John Major and David Lloyd George. Edith also told me that her mother was a suffragette.

It was great to show our thanks to Edith.
Posted by Stuart Jeffery at 13:19