Council cuts aimed at the North 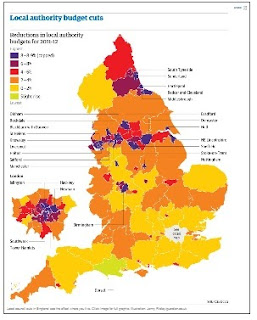 It would be interesting to do some statistical analysis based on voting patterns, political control of councils, indicies of deprvation and so on, but I doubt it is necessary. The pattern of cuts shown visually is as clear as it needs to be.

The cuts are going to protect the affluent Tory controlled south and take from poorer areas in the north. Pickles cuts are aimed at the poor - Tory policy in action.

p.s. Sadly (because I have little better to do) I have just done a quick T Test looking at Labour and Tory controlled councils. The probabilty that the spending cuts randomly fell into the unequal pattern is <0.0001 suggesting that there may be a reason for the cuts being made as they have been...
Posted by Stuart Jeffery at 07:09

Good post, but beware that the map seems to show only the county council figures in two-tier areas. If it showed districts the inequality would be less distinct, though still clear.