Spend a hectic afternoon with Keith Taylor MEP in and around Maidstone yesterday.

We visited the Oaken Wood campaigners and Keith was very impressed with what they have achieved. It looks like Kent Wildlife Trust has objected to Gallagher's plans now and there is to be a public meeting in December. 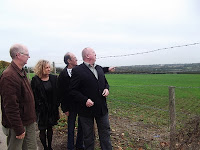 We moved on to Fant Farm where 380 houses would be built under the current strategy that the council has. Keith and I signed a letter to Cllr Chris Garland asking him to redo the Strategic Housing Land Area Assessment. Also noted is a four fold increase in the social housing waiting list, so we shouldn't be reducing plans for housing too much, but perhaps refocussing them. 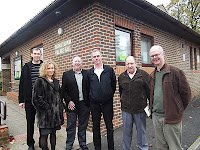 We moved on to Harrietsham to hear from the chair of the parish council about how the noise from the M20 is affecting residents there. The M20 runs right past the village and its surface is concrete rather than tarmac. The road noise a quarter of a mile from the motorway in the school car park meant we had to shout to be heard. 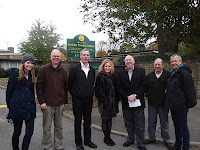 Finally we met with Janetta Sams who has been leading a campaign in Lenham (collecting 1000 signatures on a petition and presenting to the Maidstone Joint Transportation Board) to get 20mph limits around schools. Kent Police are blocking the proposal saying they won't endorse 20mph limits without traffic calming. Keith is writing to the Cheif Constable to ask them to reconsider.
Posted by Stuart Jeffery at 19:04