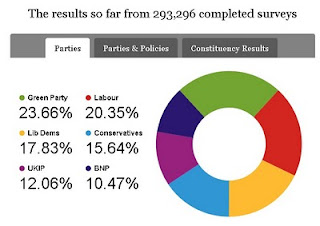 I blogged about Vote for Policies during the general election but stumbled across the site again just now. Almost 300,000 people selected their favourite party based on policy alone and the Green Party came top with a massive 24% (Labour second then: Lib Dems, Tories and UKIP).

But our corrupt voting system, bizarre political alliances and antiquated and outdated parliament mean that the party who came in the bottom half of the survey are running the country.

AV will make very little difference to the political landscape in the future and may make it worse, but at least it means that the strangle hold make be starting to break.
Posted by Stuart Jeffery at 08:33