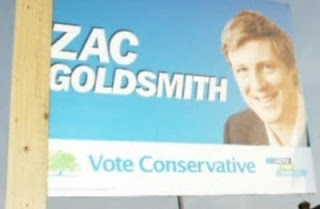 Nothing changes in Westminster. First to go was a LibDem for wrongly claiming expenses and now Zac Goldsmith is accused of overspending in his election campaign.


Despite David Laws saying that he had not benefited financially from claiming £40k for rent to live with his partner it is difficult to see how this can be true. Of course Cameron and Clegg described his actions as honourable and with dignity...

Goldsmith's claim that his garden boards were almost entirely used for local election campaigns is beyond bizarre and his defence that it is within the rules puts MPs right back where they were at the height of the expenses scandal last year.

Garden boards with large letters shouting 'Zac Goldsmith' and 'Vote Conservative' plus a picture of Zac are hardly backing a local election campaign. Spending £2800 on the boards and then putting a return in which says that just £262 relates to the general election campaign is simply wrong. Even if this is allowed within the rules somehow (and the suggestion from the Electoral Commission is that it is not), it is still cheating.

The spending limits are there for good reason - to stop millionairres buying themselves parliamentary seats. Zac Goldsmith is worth £200m.

The interview with Jon Snow is here and the expenses return is here. Goldsmith refuses to answer Snow's questions and clearly has much to answer for.
Posted by Stuart Jeffery at 14:24