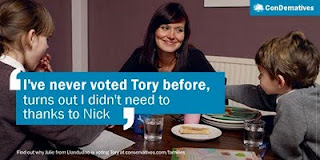 It looks like LibDems in Kent are unhappy with the coalition arrangements. They certainly like to position themselves as the opposition to the Conservatives in Maidstone so I can understand their frustration.

It is quite clear that their economic policies and principles are much closer than people think though. The deal was negotiated by Lib Dem Orange Bookers who according to the Torygraph will be quite at home in a Tory cabinet: "Judged on some of the stuff they were writing six years ago then they could find a long-term home in a Tory Cabinet. Whether it was Vince Cable’s desire to see trade barriers torn down and regulation torn up, or David Laws’ vision of an NHS provided in no small part by private companies and funded by a National Health Insurance Scheme, there’s plenty in it that would inspire confidence".

There are clearly some useful policies that aer likely to come out of the ConDem government: scrapping ID cards, no third runway at Heathrow (although both parties have appalling records on backing airport expansion elsewhere), right to protest (believe it when I see it). Let us hope these are sucessful!

I suspect that the coalition will be disasterous for the Lib Dem's vote, especially in Maidstone. 17,000 people voted against the Conservative and even if they had been sucessful, they would still be backing a Tory government. While I am quite aware that coalitions are good for politics, they are fraught under FPTP which encourages tactical voting and therefore voting against parties not for them.

The next 5 years will be interesting for the Lib Dems, if they survive that long.
Posted by Stuart Jeffery at 12:38