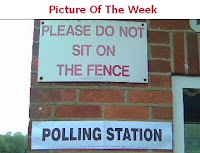 The rhetoric by the right wing press about a "coalition of losers" with a potential Lib/Lab pact to be expected, but perhaps they could remember that the Tories only achieved 36% of the vote, yet seem quite happy to go into government with the vast majority of people voting against them.

Obviously, this is not just a Tory approach. Labour had a vast majority in the commons with just 35% of the vote in 2005, so no mandate from the people then either.

This is the absurdity of our 19th century electoral system and why I am praying that the LibDems do not back down on electoral reform being a key part of the agreement.

Obviously, people have different views in different elections and UKIP's vote is very likely to be inflated due to the main issue their party camapigns on, but the results clearly show that many people do not vote for what they want under FPTP but against what they do not want. We just end up with an undemocratic mess.

It is even worse in Kent, 17 MPs, all Tory. If you live in Kent and did not vote Conservative your views are not represented by any of the MPs here.
Posted by Stuart Jeffery at 07:35

Ashdown is calling for a LibLab minority govt, excluding smaller Parties. A serious error on his part. We need a #progressivemajority govt. The LibDems and Labour need to make a C&S or 'Co-operation Agreement' arrangement with most or all the smaller Parties (excluding of course the right-wing DUP), to produce stability.
To have some kind of margin of security, in case of illness / defection / so as not to be held over a barrel by Nats wanting pork, etc. a ‘progressive majority’ needs to be as large as possible. Furthermore, a Green in on the Agreement would add much-needed legitimacy to what is otherwise a ‘government of losers’. http://www.leftfootforward.org/2010/05/greens-on-board-for-a-progressive-government