Ben Carpenter, a sixth form student at Cranbrook School has spent months arranging a debate between the four parliamentary candidates in Maidstone. His communication and organisational skills were excellent and he had even arranged Paul Sigert to chair the debate. As previously blogged, Helen Grant (Con) subsequently pulled out, but the comments from her press officer (and husband) in this week's Courier are patronising and insulting. Ms Grant needs to make a formal apology.

In the article, Ms Grant's team accuse Ben of "duping" the other candidates into attending the debate as "the others wouldn't have turned up if the main candidate was not there". Clearly she has an ego the size of Jupiter! So much for her pledge of a clean campaign.

Her team go on to say: "It is unfortunate that he misled everybody. I hope he will learn a lesson from it". Aside from being completely untrue and disgustingly patronising towards Ben, I hope that it is the people of Maidstone who will learn from it - do people really want someone as rude as this as their MP?

The other candidates are more than happy to turn up without Ms Grant. We want to engage with people, we want to debate the issues and policies and we want to support Ben in the work that he has done. 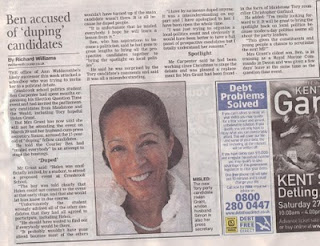