The march of 49,999 climate activists 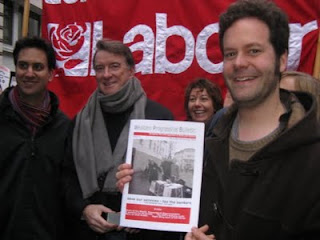 Day 2 of COP15 and the BBC are reporting that this decade is the hottest on record (no surprise for anyone who has looked at the graphs or data from any reliable source. The 50,000 strong march on Saturday showed just how strong the feeling was as 49,999 people who want serious action to prevent runaway climate change marched through London. (For the record, I don't think that Mandy would approve of the Wealden Progressive Bulletin shown here, but well done to my friends who managed to get this photo!)

It doesn't look like those stolen emails that are being quoted out of context are making any dent in the discussions. For people who are interested in why the deniers should be ignored when they try to make arguments about the emails, there is a useful video about them here.

Let us hope that COP15 gives us even a slim chance of a future. The current aim is to limit warming at 2 degrees, but even a strong agreement will only give a 50:50 chance of success.
Posted by Stuart Jeffery at 13:06