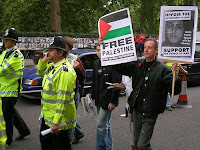 Peter is being attacked and smeared by bloggers and needs support. I've been a fan of his work for many years and his record of campaigning is beyond impressive.

As well as his 42 year fight for human rights, Peter is now Human Rights Spokesperson of the Green Party, and the Parliamentary Party Candidate for Oxford West East.

Keep up your excellent work!

This is a comment from Peter on the smears:


Out of Place - Smears against Peter Tatchell

Despite having won an apology from Raw Nerve Books over a false and libellous chapter in the book Out Of Place, the lies and smears against me are continuing and escalating. For defending myself against untrue allegations, I am now accused of “censorship.”

Out Of Place contains a chapter - Gay Imperialism: Gender and Sexuality Discourse in the 'War on Terror' - by Jin Haritaworn, Tamsila Tauqir and Esra Erdem. It was published by Raw Nerve Books in 2008.

These authors make highly defamatory, libellous and untrue allegations against me. This goes beyond reasonable criticism. It involves outright lies and fabrications. Criticism is fine. Untruths are not.

Dr Jin Haritaworn is based at the LSE’s Gender Institute; Tamsila Tauqir is from the lesbian Muslim Safra Project and was awarded an MBE last year; Esra Erdem is another acdemic, now in the US but formerly connected with Corpus Christi Oxford.

The authors’ friends and supporters are spreading further smears. They accuse me of “censoring” Out Of Place.

Among the academics making accusations of censorship are Dr Umut Erel, RCUK academic fellow at the Centre for Citizenship, Identities and Governance at the Open University, and Dr Christian Klesse, lecturer in Cultural Studies at the Sociology Department of the Manchester Metropolitan University:

The real censorship is by my critics. Some of them are posting entirely false allegations, often on closed lists that do not allow me to post my side of the story.

Many of my detractors now claim that I forced the book to be withdrawn from sale and that I pressured the publishers to declare it “Out of Print.” Not so.

I have not suppressed the book, Out of Place, or forced it out of print.
The book was listed as “Out of Print” on the Raw Nerve Books website before I contacted the publishers and challenged the lies and falsehoods written about me.

The book was not withdrawn on my account. It had already ceased to be available before I approached the publishers.

I have no objection to Out Of Place being reprinted, providing it does not include the lies and fabrications about me. I made this clear to Raw Nerve Books in a letter dated 29 July 2009.

I did not use the libel laws. This is another lie.

When I presented the publishers with evidence that refuted the accusations against me in Out of Place, they very honourably agreed to publish this apology:

Academics are supposed to adhere to the highest standards of facts, truth and of evidence-based assertions, with proper footnoting and sourcing for what they write. The authors of the chapter that defames me did not do this. They made claims that are untrue and for which there is no evidence. They provided no footnotes or sources for their outrageous false allegations. They are guilty of poor research, shoddy scholarship and desertion of academic standards.

The authors explicitly claim or implicitly insinuate the following:

Tatchell has “claimed the role of liberator and expert about Muslim gays and lesbians.” Not true. I have never made such a claim or adopted such a role.

Tatchell is Islamophobic and is “part of the Islamophobia industry.” Not true. I have defended many Muslim victims of injustice and condemned anti-Muslim prejudice. Indeed, in 1998 I drafted a law to protect Muslims (and others) against discrimination, harsssment and hate crimes. It was, sadly, rejected by the government.

Tatchell is racist and has engaged in “racial” politics. Not true. I have a 40-year record of anti-racist and anti-apartheid campaigning.

Tatchell has described “Muslims as Nazis” and made the equation “Muslim=Nazi” and “Muslim=Evil.” Not true. I have never attacked Muslims in general – only fundamentalists who oppose democracy, equality and human rights.

Tatchell has “collaborated with the extreme right” and “participated with several racist and fascist groups.” Not true. I have fought the far-right for four decades and been a victim of violent attacks by neo-Nazis because of my defence of black, Muslim, Jewish and LGBT people.

It is utterly shameful for any authors, let alone academics, to abandon honesty, truth and integrity, in order to misrepresent and lie about other people in order to wage petty, sectarian political wars.

We should fight the real oppressors and not pick fights with, and publish false allegations against, other progressive people.

For me, the sole issue is that this book printed lies. I have no objection to people criticising me, but making untrue allegations and smearing fellow comrades is shameful and has no place in progressive politics.

All my articles, speeches and news releases are archived on my website. You can view them here:

I invite anyone to find evidence that I am Islamophobic, racist or a supporter of imperialist wars or the injustices of the “war on terror.” Take a look at the totality of my campaigns since 1967. Even if you disagree with a particular campaign or article, please judge me on my overall record.

Free speech, which I defend, should not include the right to print lies that cause other people harm and which seek to pursue sectarian vendettas and to discredit political opponents. This is what the chapter in Out of Place did to me.

No one should be allowed to falsely insinuate that someone is a racist and that they collaborate with fascists. These claims in Out of Place are fiction. I have campaigned against these, and / or similar, injustices for over 40 years.
This book should not be allowed to get away with such lies about me - or anyone else.

Lies and libel that cause other people damage (as Out of Place has caused to me) are not legitimate free speech.

You would not like to be falsely accused of equating Muslim people with Nazis, consorting with fascists, colluding with the “war on terror” and promoting a racist and imperialist agenda - which is what this book accuses me of doing.

IslamaphobiaWatch, which some of my critics cite, is not a truthful, honest website. It is run by political sectarians who defame and discredit people they see as political enemies. It is full of outright lies against me and many others, including progressive, left-wing Muslims, anti-racists and supporters, like me, of the anti-war movement.

An attack on me by London's former Mayor, Ken Livingstone, is also cited by some of my detractors. Ken has since apologised for making false allegations of Islamophobia against me.

I count many leading Muslim and black activists among my friends and political comrades. They know my 42-year record of anti-racist, anti-war and anti-imperialist campaigning. They are aware that I have been a fierce defender of Muslim and black communities against state oppression, including trenchant opposition to the so-called "war on terror". They would not support me and work with me if I had done the things that the book Out Of Place falsely claims.

Jin Haritaworn, Tamsila Tauqir and Esra Erdem suggest that I am anti-Muslim and implicated in colluding with the “war on terror.” This is not true.

I have been prominent in the campaigns to defend Muslims unjustly accused of terrorism, including Hicham Yezza:

and Hyrbyair Marri and Faiz Baluch:

I stood bail and provided evidence for Mr Baluch during his terrorism trial, which helped result in his acquittal (and Mr Marri's).

I have also helped secure asylum for dozens of Muslim refugees and for Muslim victims of miscarriages of justice, such as Mohammed S:

For nearly four decades I have worked with the leading black, Muslim, anti-racist, anti-imperialist and left-wing campaigners in the UK. If I was the racist and Islamophobe that Haritaworn, Tauqir and Erdem suggest, why do these organisations and activists work with me?

I was one of the original endorsers of the Palestine Solidarity Campaign UK in 1982 and a keynote speaker at its founding conference, and I have supported oppressed Muslims from Palestine, to Iraq, Chechnya and Kashmir.

If, after reading this reply, you feel that I have been unfairly maligned, I hope you might consider posting this response or your own comments to any e-lists that you have access to. I would be most grateful.

I hope this reassures you. Best wishes.

Peter is PPC for Oxford East though.
http://www.greenoxford.com/index.php?option=com_content&task=view&id=378&Itemid=135

Have you read either of his articles on Malcolm X for The Guardian? I found them both extremely racist.

I have read them and I can see nothing racist about them.

They are here and here for others to judge.