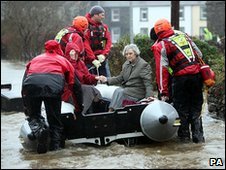 Each month NASA produce an index of world average temperature. They show what the average has been in relation to seasonally adjusted baseline (1951 to 1980). It clearly shows the rises in temperature over the past 130 years and how hot the last decade has been.

The level of variation month by month is relatively wide and skeptics use this by falsely interpretating this, however anyone with a brain can see the general trend. Worryingly, what is quite clear is that after the predicted relatively cool 2008, things are getting hotter again. Four of the last five months are all the second hottest on record (which while it sounds a little complex is a bit like a racing driver coming second in four out of five races which could easily put him/her in a commanding lead). Even a year isn't long enough to demonstrate a trend in climate terms so the recent months could be a blip, however they are in line with the general pattern.

I doubt today's footage of Cockermouth will be directly linked to climate change, but it should serve as a minor warning of events to come. Unless Copenhagan sucessfull agrees a international plan to rapidly reduce carbon emissions we will hit the doomsday scenario of 6 degrees.

Of course the UK must show leadership in carbon cuts, but none of the three main parties have the policies or will to secure our collective future. They should be ashamed of themselves.
Posted by Stuart Jeffery at 15:20