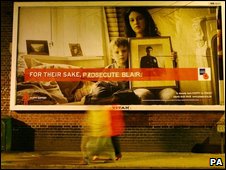 It seems that the anti-war protestor who defaced British Legion posters in Gillingham by changing "For their sake, wear a poppy" to "For their sake, prosecute Blair" has apologised anonymously.

The consequences of this action hurt the people in the poster who had lost a father and husband and it was clearly wrong of the protestor to do this, so he / she was right to apologise. However, I have a great deal of sympathy with the anger of the protestor. Blair seems to be continually rewarded for his war crimes and, although less likely now, was in the running to become president of Europe.

Furthermore, I walked past a British legion stall last week, and in bold letters was "1914: THE GLORIOUS WAR". There is nothing glorious about war, and especially not that one. It is time for a new message, one that honours and respects the dead, but one that says going to war is almost always wrong.

The White Poppy movement has been around for 75 years and surprisingly few people have heard of it. I've been wearing white poppies for a few years now and I would encourage others to do so. My daughter told me that a couple of the teenagers at last week's historic UK Youth Parliament in the House of Commons turned up in White Poppies - superb stuff (n.b. watch the debates on iPlayer).
Posted by Stuart Jeffery at 07:27

Certainly the victims of the First World War didn't think it was 'glorious' - and the victims include the many thousands of conscripts who died a miserable death in the trenches.
But the reason I wear a red poppy as well as a white one is to commemorate all the victims.

I wear one in memory of all those who fought to defeat the Nazis, and all those who were caught up in the war while wanting no part of it.

My father piloted Lancasters and was shot down (Nov 4th is the 65th anniversary of this), some of his friends dying in the air. He saw terrible things but survived and I'm thankful to him and all those like him every day, for the freedom I now enjoy. He never glorified it but he always wore a poppy. Fighting fascism is a popular topic for many on the left, although they seem shy of commemorating those who actually did it.

And it doesn't mean I agree with everything 'my' government does.

It is essential that we remember the dead but surely the best way of honouring them is not to repeat the mistakes that the governments of the time made.

I deliberately did not said that all wars were unjustified. The fight against the Nazis and stopping the holocaust clearly was.

Members of my family fought in both world wars and later refused to discuss what happened there, only to say that it mustn't happen again.