It's so close here

I know I have blogged before on "It's so close here" and the misleading leaflets from the LibDems, such as the one which claims that only the LibDems could beat the Tories in last month's European election in Maidstone with the famous bar graph of a convenient election result. The statistics used there were the numbers of councillors on Maidstone Borough Council rather than numbers of votes. 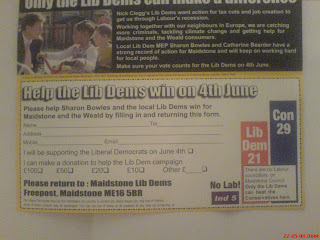 They also like to distort the size of the bars so that the result looks closer than it really is, but just look at this bar chart that I discovered while throwing out the election stuff. 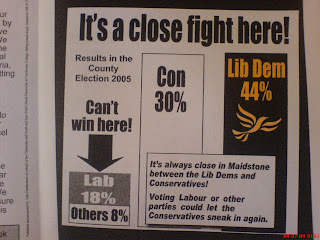 The key ploy remains the same, us or them politics. In this one they try to make out the Tory threat is greater than it really is.
Posted by Stuart Jeffery at 18:47

Stuart, you seem to credit the general public with very little intelligence. Given the huge font size of the numbers on the graph, surely people are clever enough to draw their own conclusions.

I am yet to see a leaflet from any party in which there hasn't been something that is inadequately explained, where the context is deliberately ignored, or where the facts are misrepresented.

As much as I'd like to find a party which can claim the moral high ground here - and it would certainly make me more likely to vote for them - as yet no luck.

Thank for your comments. While out door knocking in the division where this leaflet was delivered quite a few people were concerned that the Tories were very close to winning. Many people do believe what they read (just look at people's views on climate change and where they have got their view from) and a repeated message has a very strong impact.

My point is not that there is inadequate explanation or accidental misrepresentation, but that these bar charts are being manipulated deliberately to mislead people.