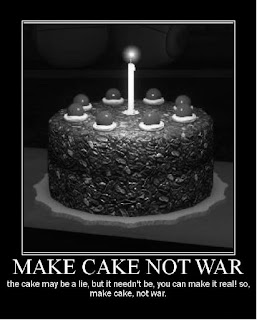 The Wealden Progressive Movement's latest bulletin/newsletter is out. I have only recently discovered this group and have been very impressed by the work that they are doing. Their latest newsletter has articles on the Gaza demonstrations in Tunbridge Wells and Maidstone, articles on the recent strikes, economics and monetary reform, and plenty more, including this Make Cake Not War picture!

This is a snippet from "Fighting the Wrong Enemy":

"The reports of unofficial strike action across the north of England in response to the award of a contract to build a new power plant to an Italian company, which is not going to use British workers is possibly the first step towards concerted calls for protectionism in Britain.

"The workers, who are rightly scared for their livelihoods are blindly repeating the mistakes of previous generations during economic hardship. The new found militancy and the support shown by other workers should be applauded, but sadly they are focusing on the wrong target.

"The situation which allows multinational companies to move labour and finance around the world at a whim is the real problem here, not Italian workers, who like their British counterparts are simply trying to make a living.

"British workers must realise that they share a common enemy with their foreign equivalents, and that they should be asking why Italian workers are being used by the companies involved. The simple answer is that they are cheaper to employ, thus the company makes a larger profit on the contract.
Posted by Stuart Jeffery at 09:05

Lol, I made that picture! It was my contribution to this edition, I'm glad you like it! Hopefully, next issue I will do an article on the French Revolution.
PS I am 12, but I am already a keen political activist!
PPS If anyone else reading this wants to contribute articles, please feel free to submit them to WPM.
PPPS The idea for the picture came from my favourite game at the moment, PORTAL!
PPPPS Bye for nao!