The Guardian has now started to brand eco-campaigners as extremists. This ridiculously misleading article attempt to make a link between a group that torched a Hummer in the US and the climate camp protestors, and manages to brand both as extremists.

I'm not even sure that torching cars is an extremist act, a lot of it went on the estates that I grew up in...

Fortunately, despite the police's National Extremist Tactical Co-ordination Unit being deployed against people who are trying to stop the destruction of the living world for the sake of our children (the 6th Mass Extinction as it has being described by the New Scientist), the judiciary seem to be on our side. Minor damage to property was seen as having just cause at Kingsnorth.

Thanks to Marc Roberts and Matt Sellwood for pointing it out. This is from Marc's blog: 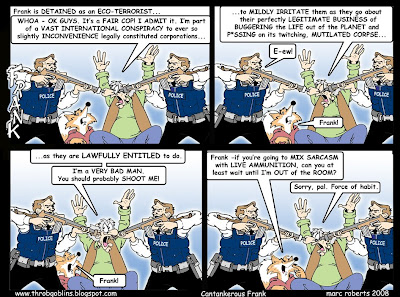