It will all be OK next year 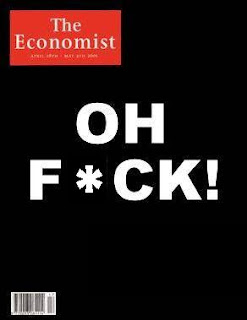 I have seen a couple of commentaries claiming that the current economic troubles will rumble for the rest of the year and then resolve themselves later in 2009.

I'm sure the IMF are very clever people to predict that the recession will only last 12 months, but as other reports talk of the worst economic crisis for 80 years, I have to question their judgement. After all if these economists were really that good they wouldn't have invented a range of financial instruments that were as flakey as Palin's politics.

Iceland seems to have gone bankrupt, along with a range of banks some of which have been nationalised and under written. People are describing this as a domino effect, but a domino chain is easy to stop - you just have to introduce breaks in the system. Global banking is more like a ponzi scheme or pyramid. You whip away one brick and there is little to stop a significant collape.

This is not all bad. Lessons need to be learnt and new systems need to replace the old. A shift to nationalised banking with the scrapping of iffy financial instruments would be a great start.