Apparently Gordon Brown's sunk £3 million into disrupting peaceful protest, trying to bully climate campers and distrupting Hoo, near Rochester. The police presence at the camp is phenomenal and a ridiculous waste of money, time and carbon. One of the people at the camp told me the police effort was claimed, by them, to be carbon neutral. Apparently smoking doesn't cause cancer anymore either.

The intimidation is endemic and all the more reason for people to go along to show that we won't be put off by them. The night time disturbances are probably the best example of political policing, my friend, Trish told me that they started playing Wagner from the helicopter at 2am Wednesday morning. Forget stop and search / obstruction / charges by riot police - I utterly fail to understand what grounds the police have to be able to play Ride of the Valkyries at 2am. Mind you the choice of music says it all. They are preventing the food delivery vehicle from entering the site and there was a steady stream of food being wheelbarrowed onto the site, subject to stop and search each time (the police just love searching greens???).

Anyway a round up of the news from the camp. The Kent Messenger continued its great coverage today, Trish Marchant, who stood in Boxley Ward, gets a good mention and the paper devoted a whole page to the camp. Caroline Lucas has written to the 'Gold Commander' to complain about the appalling behaviour of the police. Hazel Dawe, chair of Kent Greens has written to Mike Fuller on similar grounds. Hazel has also spoken out about about 'Checkpoint Charlie'. Having spent an hour and a half there this afternoon, I think the description is apt.

All this stupidity by the police and Gordon Brown just resolves us to campaign more.

One thing that the police keep repeating is 'health and safety'. I passed a number of people talking on their mobile phones while driving as I cycled to Kingsnorth, but I couldn't see the police arresting them. As for 'health and safety' - how can the devastation that climate change will bring match H&S concerns?

Finally, impressive stuff from Lego Land, they have built their own powerstation complete with direct action protest. 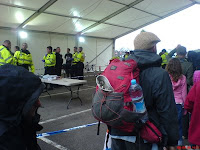 Tomorrow is the day of action at Kingsnorth. It will need to be very well planned - but should be interesting.