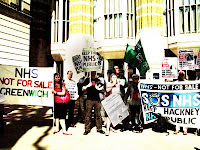 On Monday I met with one of my heroes, Mayer Hillman. It was at a work conference and I knew he was speaking but he was at the conference for the whole day and I had a chance to meet and talk with him at length. An absolute privilege!

During the week I have started getting emails from Fidel Castro. Having published a paper on Cuban healthcare a few weeks back the Cubans have taken an interest in me an I'm now on his email list.

Today I have been in London again being part of a demonstration to stop privatisation of the NHS organised by the Keep Our NHS Public campaign (I'm a member of the steering group). Plenty of Greens there, lots of press and a few police.

The protest was outside Richmond House in the 'no protest' 1km zone around Parliament and therefore if you don't have prior permission from the police you are in breach of the Serious Organised Crime and Police Act (2005). Some one forgot to get permission.

I was looking forward to my 42 days detention, as voted for by Ann Widdecombe in her bid to get rid of as many civil liberties as possible before she retires, but the police were happy to let us carry on for nearly an hour. Clearly they didn't know about my Cuban connection.
Posted by Stuart Jeffery at 19:56